Another Super Bowl? No, just slightly above average.

This may come across as completely un-American. Foolish, senile, or even worse, slightly effeminate. I don't really care about the Super Bowl. It isn't that my team didn't make it and I am bitter. I just don't care. If they could both lose I would be happy.

I don't really care about the commercials, either. That may sound almost heretical considering the fanaticism some people have for the expensive little programs that have been months in the planning. And whose secrecy would be the envy of almost every government in the world. I live in fear that I may see one played during the following days morning news and will be forced into a discussion.

"Hey, did you see that potato chip commercial with the dancing bears and arm wrestling onion dip containers with the huge biceps?"

"Yes, damnit, I saw it. You bastard. I saw it and it was the longest thirty seconds of the past year. Thanks for rubbing my face in it. How's the wife and kids?" Work relationships are so complicated. 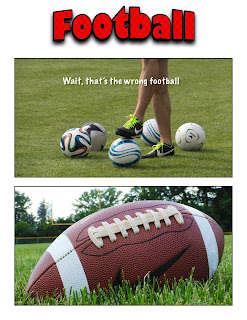 It isn't the money, though it seems a little foolish the amount of money spent this weekend. I don't even like to think about the money each team is spending motel rooms, team meals, entertainment. Assuming they actually pay for any of that stuff, people are just lining up to give them things. The money players are making is beyond comprehension, numbers that average people don't understand. But, everybody comes out ahead, right? The host city, the owners, the advertisers, the fans, everybody has a stake.

Except me, I don't care. And, despite not caring it is almost impossible to avoid. It is the event of the season. Pre-game started as soon as the playoffs were over, or maybe as soon as the regular season began, or maybe right after last years super bowl, when one team of highly paid athletes, dressed in coordinated costumes beat another team in a game that I can't really remember. And people all over the country celebrated in reserved silence, not really it was probably an impressive display of consumption and excess.

It has become an event that is so freighted, so talked about, so pompous, the reality can never meet the expectations. The talk is more important than the game, the announcers and the pregame dissection reduce the play to an afterthought.

Fortunately, this year my son is going to a friend's house to watch the game, so I can avoid it, and the commercials, and the endless analysis and second guessing. So, to the Eagles, who my son is rooting for, and the Patriots, who have become the team to despise, or love, depending on your affiliation and loyalties, and all the fans, advertisers, hoteliers, restaurateurs, and anyone who cares best of luck, enjoy the game, just keep it down, some of us are trying to relax.

Tim Clark
Just a guy trying to get by.

I like college football, I like the Nebraska Cornhuskers. I don’t much like Ed Cunningham. The color announcer ABC seems to curse Nebraska with constantly. It does seem to be a mutual distaste, though, he doesn’t seem to like Nebraska very much.

For one thing, despite the fact Tommy Armstrong is one of the leading quarterbacks in the Big Ten, and Ed Cunningham was a center, he continually harps about the mistakes Armstrong makes. Nobody is perfect, Ed, and Armstrong is having a great season. Yesterday, for example, Armstrong accounted 303 total yards in offense, compared to 288 for David Blough, the talented, prolific quarterback from Purdue, whom Ed Cunningham could not praise often or loudly enough. Yes, the stats are not in a completely comparable because 51 of Armstrong’s yards came rushing, and Blough lost 21, still these are the statistics and they are real. And, in the most important statistic of the day, Armstrong had 1 win and Blough had 1 loss.

Routinely, he has for the last several years, cast doubts on the teams. He has criticized the quarterbacks, the line play, and the ability to win consistently. I am at a loss. Did we do something to you, Mr. Cunningham? 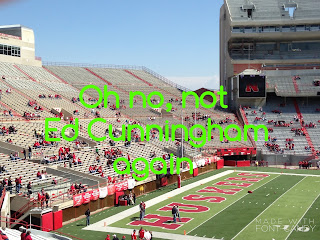 In comments about Mike Riley, Ed Cunningham talked about what a decent man and knowledgeable coach he was. True on both accounts. Then he talked about how last year NU fans were not certain he was the right man for the job. Of course, he neglects to explain that Nebraska was 3 and 6 at one point. Most fans of any program accustomed to bowl trips and winning records, would harbor doubts. He also fails to explain that his alma mater, the Washington Huskies have chased high profile coaches with boundless enthusiasm, and fired them with equal fervor. In the time since he graduated Washington has been through 6 coaches, and Nebraska only 4.

It is difficult to understand what he could possibly have against Nebraska. His teams played NU, but as far as I remember they won more than they lost. And a brief search I can’t find a record of his teams losing even once to the Huskers. Most players have praised Nebraska fans as being polite, and well mannered. I remember Mack Brown, when he coached Texas, and the Longhorns snapped Nebraska’s home winning streak, largely on the legs of running back Ricky Williams. After the pair were interviewed at mid field by the press, he said he told the the running back to put on his helmet for his own safety. He was worried about missiles being hurled from the stands. He was amazed to see Williams getting a standing ovation.

I beg of you ABC, ESPN, Walt Disney, whoever makes the decision, anybody but Ed Cunningham.
Posted by Tim Clark at 11:02 AM No comments:

Tim Clark
Just a guy trying to get by.

It's Hard to NOT be a Cubs Fan 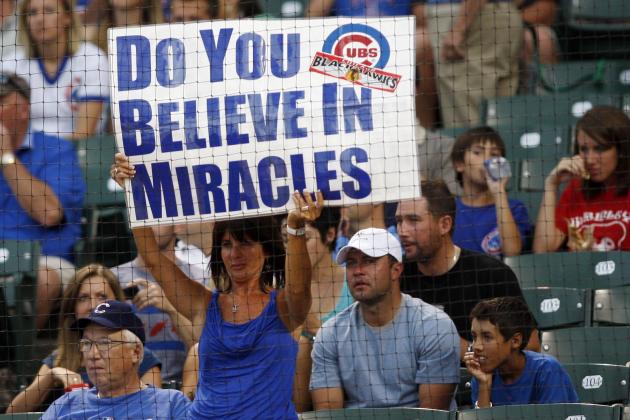 It's been 109 long years since the Chicago Cubs have won a World Series, and as a long time Red Sox fan I had at one time felt a kinship with the lovable losers of the National League. The 82 years of misery that the Red Sox faithful had really been nothing compared to the misery that a Chicago Cubs fan has endured. Interestingly enough the Chicago White Sox had been in a World Series drought for a couple of years longer than the Red Sox had when they won it the year after the Red Sox finally did, but again, when you have the Cubs on the other side of town nobody really thought of it.

Also as a Red Sox fan there were a few other things that linked these two franchises together. In the early 1900s both teams were considered overly dominant, and people wondered what the world of baseball would be like if these two teams didn't go into a slump. Well, that problem seemed to fix itself. The Red Sox having won 5 world titles in 15 years and the Cubs being the first team to go to three straight world championships and winning two of them (their only two, poor bastards) was quite the talk. Other franchises that were simply fighting to stay alive at the time were quite unhappy about their prospects, like the Baltimore Orioles for example that couldn't draw flies, and were forced to move to New York and change their names to the Highlanders. They only managed to make it to the World Series 40 times since then.

I used to be considered a member of "The Fellowship of the Miserable" who found much more joy in the losses of other teams than the victories of my own. Of course this was before my Football team won 4 Super Bowls, my Baseball team won 3 World Series, and even my Basketball and Hockey Team each took a championship. It's not just because I happen to live in winnerville now that I am happy to say that I have learned to NOT take happiness in the misery of others. No actually it was Yankees fans that might have taught me to be a better person. After the Red Sox had their unprecedented 4 game comeback to beat the Yankees in the ALCS (and then went onto win their first World Series in ... well a while) I expected to see interviews with miserable Yankees fans. What I saw were a lot of Yankees fans saying it was the best series they ever saw and were rooting for the Red Sox. I felt rather small after that.

If the Cubs manage to make it to the World Series this year, it will be a hard one for me to deal with. It would mean that they are facing the Cleveland Indians who are managed by the manager who brought the championship home to Boston after all those dark years. Terry Francona is a good guy and I would be all in for the Indians if they were facing the Dodgers. The fact that they may be facing the Cubs will make it hard for me to root for them. After all the Cubs are the last bastion of curses in the world of Baseball, and I don't think I would be a true fan of the game if I didn't want to see them finally hoist their trophy that they have worked for since 1908. I mean I know how bad it was to hear the chants of 1918. I can't imagine the pain they must go through. It's time for it to end.

Posted by Jeremy Crow at 9:00 AM No comments:

It's always nice to be right.

Well, I am looking pretty smart right now. Nothing new really, people stop me all the time, making comments about how bright I look, mostly things like, "hey, do you know how to get to the Records and Registrations Building?" or "hey, can't you read the "Side Walk Closed sign, you moron." Having a superior intellect can be hard. Looking so intelligent can be a struggle. That is fodder for another post, though. I am here to talk about my brash prediction that the Nebraska Cornhuskers were going to go undefeated and win the National Championship.

It isn't really all that bold when you realize that I make that exact same prediction every year. Most years, though, I don't get a lot of cooperation. Other teams play better, the ball bounces the wrong way, critical mistakes are made at terrible times. The litany of heartbreaking events goes on infinitely.

This year, though, NU started 5 and 0. Five wins and no losses. And more importantly they are doing it in a way that recalls the programs glory days. Plays that many may call boneheaded simple are once again brutally effective. 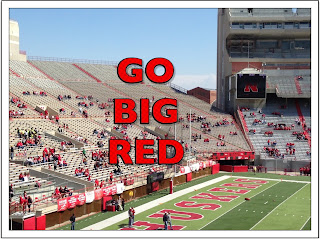 With a 10 minute drive Nebraska hammered the ball at Illinois, repeatedly, running backs smashing through holes cleared by huge, quick linemen. Terrell Newby finally broke through from the 4 yard line to give Nebraska an eight point lead.

It was a punishing display of power football that made me dream of Rathman, Craig, Philips,
Mackovicka, Schlesinger, and Rozier. People say it is difficult to run the ball when "they put 7 in the box." Maybe, but those guys did it. And now Newby, Wilbon, and Ozigbo are doing it, to the tune of a 78 to 6 scoring advantage in the 4th quarter so far this year.

Of course the difficult part of the schedule remains. And there is a lot to prove against the beasts in the east. Michigan, and Ohio State are teams that are talented, and tough. But, I stand by my prediction. And if you wait until after we (the Cornhuskers and I) win those games to start screaming Go Big Red (The loudest cheer at NU's games) you are going to look like a bandwagon jumper. Nobody wants that.

Tim Clark
Just a guy trying to get by.
Older Posts Home
Subscribe to: Posts (Atom)